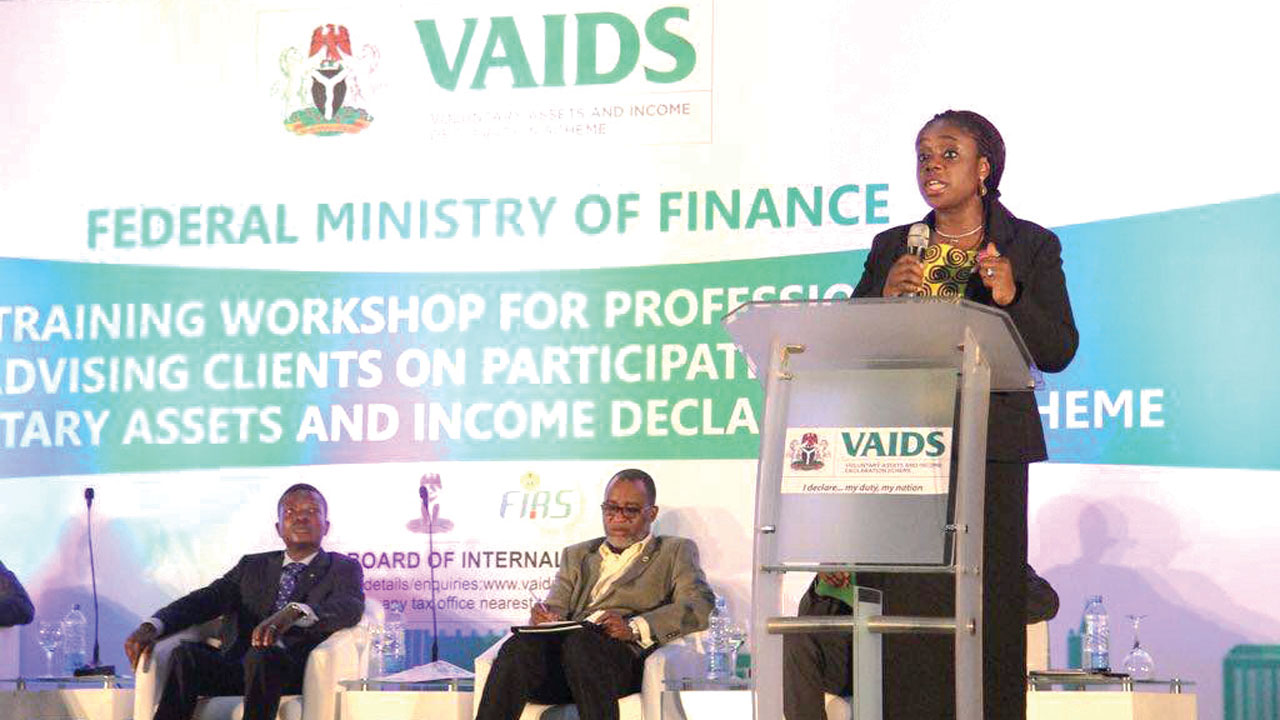 Minister of Finance, Mrs. Kemi Adeosun (right); addressing lawyers, accountants and other professional advisers during the workshop jointly organised by the ministry, Federal Inland Revenue Service and Joint Tax Board for the advisers of the Voluntary Assets and Income Declaration Scheme (VAIDS), at the weekend, in Lagos

Tax status letters will be issued to no fewer than 500 high net-worth Nigerians by the Ministry of Finance today.It shows that the Federal Government’s Voluntary Assets and Income Declaration Scheme (VAIDS) is already paying off, according to Finance Minister Kemi Adeosun.

VAIDS is a government tax amnesty programme that allows a nine-month window for defaulters to voluntarily self-assess and declare their correct local and foreign assets/incomes for taxation purposes.

The project, which began on July 1 this year, is expected to end on March 31, 2018, after which defaulters will be treated as tax evaders in accordance with the country’s ‘criminal’ law, Adeosun stated.

Adeosun, during a chat with journalists in Lagos on Friday said that the policy was already paying off as the ministry received $110,000,000 from just two firms. “We have had very good response from companies, so far,” she said, stressing that data-driven compliance will, over time, ease Nigeria’s debt burden and cut budget deficits.

“The problem was that before, for example, if you lived in Lagos or you ran a company, Lagos didn’t know that you were running a business in Abuja,” Adeosun said. “Lagos didn’t know that you had a property abroad; it didn’t know that you had moved money to Dubai. Lagos State, for example, didn’t have jurisdiction to go to those areas to claim you were resident in Lagos. So, there were so many loopholes that largely no one was really paying the right taxes, and that is why our analysis found out that only 241 people in the whole country were paying N200,000 or more. South Africa has 950,000 people paying that amount.”

In a subsequent statement from the ministry yesterday, Adeosun re-iterated that a list of 500 prominent Nigerians with property and trusts abroad had been compiled to determine their tax compliance status at home.

The 500 prominent Nigerians will receive their letters beginning from today, asking them to take advantage of the tax amnesty to regularise their status and avoid prosecution and fines.She also warned that non-receipt of a letter should not be taken as an indication that government had not identified a potential evader.

“The first 500 letters are ready and will go out this week, but there are many more. Receiving the letter is not an accusation of deliberate wrongdoing, but rather a notice that the data suggests possible underpayment and a prompt to check compliance.

“Such persons can then legitimately be called tax evaders, as their non-participation in VAIDS indicates that they are willful tax evaders. We will then proceed to apply the full weight of the law.“We are also sending out thousands of letters to those in the high-risk categories, but our advice is that every person and every company should do a self-assessment and take advantage of VAIDS to correct any under-declaration, irrespective of whether they get a letter or not,” she said.

Adeosun also disclosed that 1,710 out of 2,190 Community Tax Liaison Officers (CTLOs) have been deployed in 33 states.The CTLOs, trained and recruited under the VAIDS, will form a rallying point for tax information and data dissemination needed for both the government and taxpayers.

The minister also confirmed the review of tax profiles of companies that received major payments from the Federal Government in the last five years.Adeosun reiterated that the revolutionary programme provides tax defaulters a nine-month opportunity to voluntarily and truthfully declare previously untaxed assets and incomes, urging all to comply as the window would compulsorily close at the end of March next year.

She said that job creation was one of the spin-offs of the scheme expected to throw up a total of 7,500 opportunities for Nigerians as CTLOs through the N-Power scheme of the Federal Government.

The minister asserted that with the scheme, there would be no hiding place for tax evaders residing in Nigeria or abroad, noting that the Federal Government had put in place a data mining mechanism to fish out culprits.

“The unique cooperation between the various arms of the Federal Government, states and foreign governments has provided an unprecedented level of data that allows Nigeria to profile taxpayers accurately and identify those whose lifestyles and assets are not consistent with their declared income.

“A lot of data mining is going on daily, both locally and internationally, on property ownership and other items. Data is an extremely powerful tool that is now being utilised.“For instance, we have reviewed all companies that received major payments from the Federal Government in the last five years and found that even those who made money from government under-declared,” she said.

The minister further noted that the government’s tax compliance team had looked at import records and compared the value of goods imported to the tax declarations of the importers, but the discovery was worrisome as “the variance was disturbingly wide”.

“On personal income taxes, we reviewed property and company ownership as well as registration of high value assets and foreign exchange allocations, which gives us a sense of the lifestyles of the person.

“But again, we found major non-compliance. In some cases, people declared as little as N10 million as income, but purchased expensive property overseas and in Nigeria, registered high specification vehicles and funded luxurious personal events costing multiples of the declared income.

“We have blocked a major loophole by using data to profile tax payers. Thus, someone owning properties across multiple states and overseas can selectively declare knowing that tax authority had no means of cross-checking.  “This is especially the case with overseas assets and income where state governments lacked jurisdiction. But with the centralisation of data under Project Lighthouse within the Federal Ministry of Finance, a major loophole has been plugged,” she added.