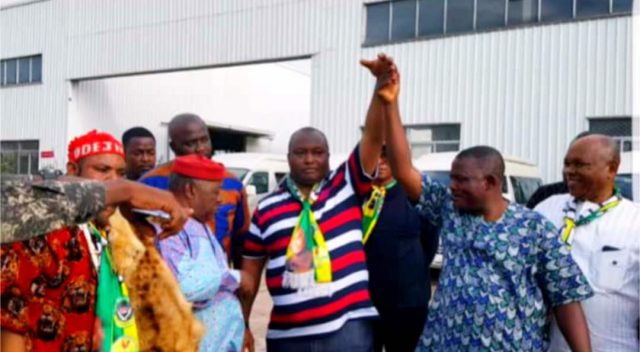 It was a day of disappointment and tears for Dr. Patrick Ifeanyi Ubah’s political opponents as the CEO of Innoson Vehicle Manufacturing Company, Chief Innocent Chukwuma (Ifediaso Nnewi) who was rumored to be supporting another Anambra South Senatorial aspirant on Thursday, publicly expressed his support for ambition of the oil magnate.

The manufacturer made his support known while donating two buses to Ubah’s campaign team at his factory in Nnewi. He also urged Ndị Anambra South to give maximum support to his brother with a heart of gold, Dr. Patrick Ifeanyi Ubah because he is the only aspirant that can boldly project the interest of Igbos in the Senate. The Innoson boss also thanked Dr. Ubah for his efforts towards the betterment of the economic status of Nnewi and expressed confidence in him to do more as a Senator.

In his response, Dr. Ubah thanked Chief Chukwuma and assured him that he will put more efforts towards the advancement of the Igbo economy if elected.

Dr. Ubah who is also the CEO of Capital Oil and Gas is aspiring to represent Anambra South Senatorial District on the platform of the All Progressives Grand Alliance (APGA) at the upper chamber in 2019.

This development which is a boost to the Ifeanyi Ubah campaign also puts to an end the speculation that Chief Chukwuma who has been a good friend of Dr. Ubah is supporting another aspirant.

“I am a thief” tattooed on teen’s forehead

Some of your cabinet members are corrupt, clergy tells Buhari