Biafra: Nnamdi Kanu reveals what Igbos must do on November 18 for secession to succeed
​ 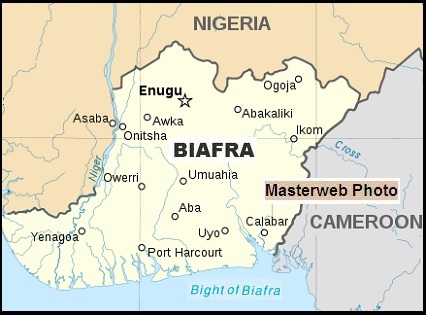 ​
​
The leader of the Indigenous People of Biafra, IPOB, Nnamdi Kanu has appealed to his followers to sit at home on November 18 if they want to actualize Biafra.The IPOB leader gave the call while addressing a huge crowd at Nri, Anambra State on Tuesday.Noting that Biafra would come like a huge surprise to many, Kanu said this can only happen when people cooperate with leaders heading the secession struggle.According to Kanu, “Biafra would come as a surprise to many if the people cooperated with the blue-print of the leaders of the agitation.“If you want Biafra to be restored, sit at home on November 18. I am not saying you should fight or take up arms; rather you will see Biafra emerging like the rising sun very soon.”Expressing joy that the people of the Middle Belt had realized their mistake in taking sides with the Federal troops against “Biafrans” during the civil war, Kanu said, “the agitation for Biafra is a true fight for freedom, and they are now supporting the move”.He also frowned at the visit of the former British Prime Minister, Tony Blair to the Kaduna State Governor, Nasir El-Rufai.Kanu claimed that Blaire’s visit was to lend support to the North in perpetuating their dominance of the Nigerian political space to the detriment of the South.Report a problem.

Lagos bridges under threat of collapse from parked trucks