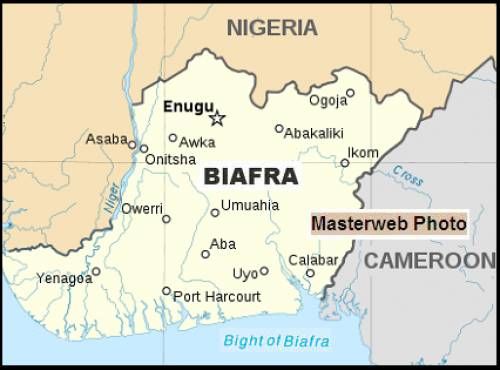 Movement for the Actualization of Sovereign States of Biafra (MASSOB) has said that the South South geopolitical zone and the entire Eastern Nigeria constitute the Biafra territory and remains committed to actualize an independent state of their own, Vanguard reports.MASSOB Leader, Solomon Chukwu who stated this while reacting to reports that South South is not part of Biafra, described those holding such view as ignorant of the history of the struggle to liberate their people from the marginalization of the Nigerian government and warned them to stop deceiving the public.Chukwu stated that the May 22 and 30, 2017, anniversary in commemoration of Biafra heroes which was observed throughout Eastern region have proven to the Nigerian government and their agents that the people of Biafra can no longer be held back in their struggle to have a homeland where they could find greater accommodation and satisfaction.According to him, “Those who say South South or Niger Delta is not part of Biafra are ignorant; most of them are politicians in the South South zone who are saying it out of mischief to impress their Hausa/Fulani task masters.History has it that people like Ojukwu’s second in command, Gen. Philip Effiong, fought for Biafra till the end. Was Effiong not from Akwa Ibom State? My father and other strong men of Niger Delta also fought for Biafra till the last day of the battle. How can somebody like Albert Horsefall say that Port Harcourt is not part of Biafra? I’m a Biafran from Ikwerre land in Obio/Akpor local government area of Rivers state. I’m a true son of Niger Delta. Till today, we still have many strong men from the South South who stands to be counted in supporting Biafra. People like Uche Okwukwu, Asari Dokubo, among other great Niger Delta sons who are in support of Biafra.Whether they call us South South or Niger Delta or Igbo, the Eastern region is united in the struggle to actualize an independent State of Biafra. Some people from the area who sabotaged Biafra during the war have seen through the Hausa/Fulani deception and regretted their actions.”He explained that it has been the ‘game’ played by the Hausa/Fulani bloc to ensure that the people of the Eastern region are permanently divided so that they will continue to exploit their God given resource leaving the people in abject poverty.“This has been one of the divide and rule styles they use against people of the Eastern region, by saying Akwa Ibom, Rivers and Cross River, Bayelsa is not part of Biafra but it is no longer working, our people have seen through their tricks over 30 years ago. We are wiser now; people from Cross River, Akwa Ibom, Delta and the Igbo speaking part of Edo and Benue attend MASSOB meetings. A part of Kogi state has indicated interest to join Biafra when independence is achieved. Those who say South South is not part of Biafra are only deceiving themselves.”

Nigerians, condemn FG’s silence on death of 26 girls on Mediterranean...