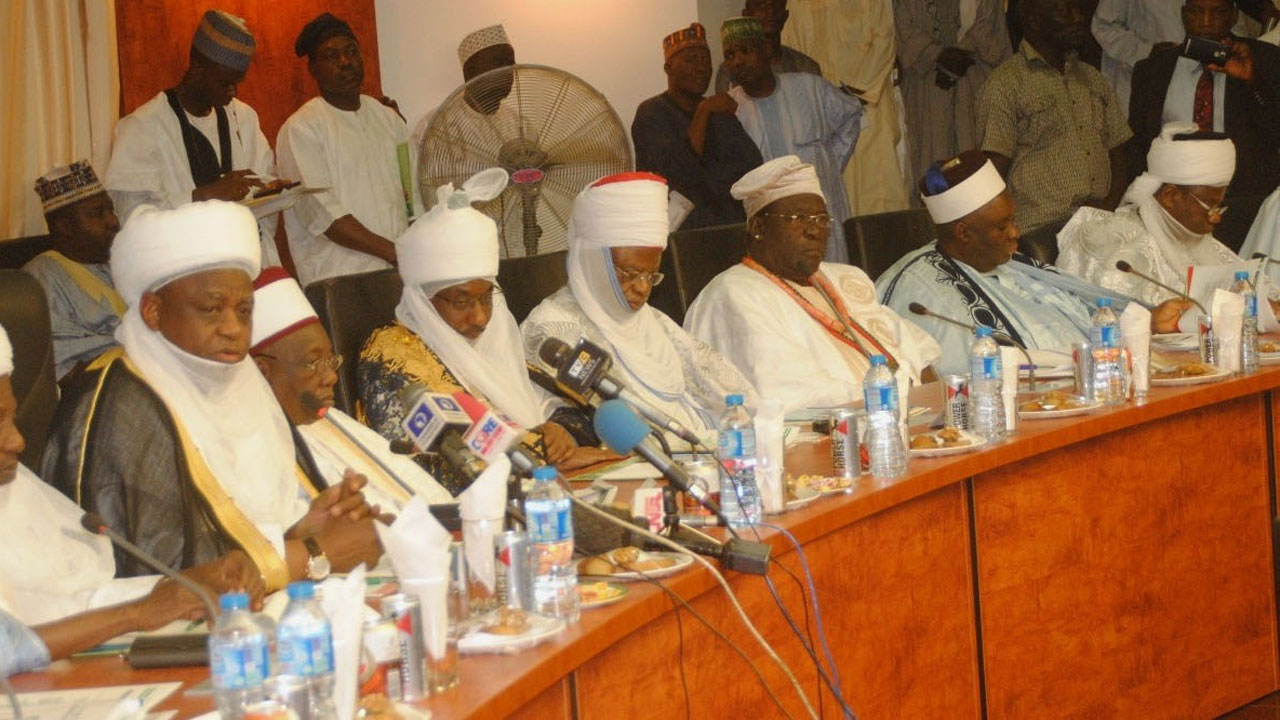 (FILE PHOTO) The Sultan urged politicians to improve the lives of Nigerians, berating those who merely use the electorate to win votes. He also called on government at all levels to implement programmes that could move the country forward. PHOTO: BellaNaija

The North is not intimidated by calls for restructuring of the nation and is ready to discuss the issue if the right cards are put on the table.

This was part of submissions following a two-day retreat by the Northern Senators Forum (NSF) in Katsina State yesterday.

According to the Forum, the region was not afraid of any “sensible and meaningful arrangement, provided it guarantees justice, equity, fairness and the unity of all Nigerians”.

It described the matter as ambiguous, even to “proponents, without clear terms and directions on how to go about it”, adding, the North would, at a later date, take a “well articulated, firm and common position” on restructuring, in collaboration with other northern members of the National Assembly.

The Forum also resolved to map out a Marshall Plan for development of the region, saying the proposition would be carried out in partnership with critical stakeholders, its House of Representatives counterpart and the Northern Governors Forum.

A communiqué signed by NSF chairman, Senator Abdullahi Adamu, said the Plan would be all embracing.

The retreat discussed “the huge infrastructural deficit” in the North, noting that this challenge has weigh down socio-economic advancement, hence “the need to design an all embracing Marshall Plan for the development of the region”.

The NSF said: “The insecurity of lives and property and the lack of capacity of the state to adequately guarantee the most fundamental of rights are the most critical challenges facing the region in particular and the country in general.

“The prevalent ethno-religious crises in the region are politically motivated and have little or nothing to do with religion. The alarming statistics of out-of-school children and the number of learning institutions in the region explains why it is educationally and economically backward, in addition to poor budgetary funding and bad governance.”

Speaking earlier, the Sultan urged politicians to improve the lives of Nigerians, berating those who merely use the electorate to win votes. He also called on government at all levels to implement programmes that could move the country forward.

Afenifere, a pan-Yoruba social-cultural organisation, however insisted Nigeria needs a devolved structure and return to a parliamentary system of government.

The group’s national treasurer, Chief Supo Shonibare, warned that the country could not survive as a united entity amid monumental infrastructural challenge.

In a phone call with The Guardian, he said: “Afenifere welcomes urgent actual actions on our prescription that we need to not only conceptualise. We have been doing that for years, but also engage in practical actions on the discourse on the necessary structure able to resolve the agitation for devolution, and the need to increase our ability to reduce the costs of running government.

“It is good to want to increase the country’s agricultural produce and explore the idle mineral deposits in the North, one however needs a structure able to allow those in the North make the necessary economic decisions without a ‘quango’ at the centre determining issues of licensing and legal framework (but) able to assure investors of speedy resolution of contact disagreements within the region where these activities will be carried out.”

He described the Federal Government as an unwieldy wasteful entity, absorbing 70 per cent of the country’s expenditure with very little to meet infrastructural deficit requirements and education.

Also, Second Republic politician, Chief Guy Ikokwu, said each state or zone should be given responsibility as it was during independence so that each state would take up the responsibility of its children, workers, education, agriculture, industry and infrastructure.

“If the country is restructured, the economy will rise. At the moment, the economy in the Northern and Southern states are only growing by one percent. That is why there is a lot of criminality in the country and lots of hunger such that people are now selling their children for a bag of rice. It is something that has never happened in before. With a restructured Nigeria, there will not be a do-or-die affair of who wants to become president.”

The Middle Belt Youth Council meanwhile has said, “After extensive consultations among the youth and with our elders, (we) have come to the conclusion that it will be a disservice and disaster for Nigeria to elect either of these tired old men,” referring to President Buhari and former Vice President Atiku Abubakar.

“We, the determined youth of the Middle Belt, hereby reject both Buhari and Atiku in the 2019 presidential elections. We shall identify and promote a more competent, compassionate and cosmopolitan leader who would rise above tribe and religion to foster unity, justice and equity across the country. Nigeria needs a new leadership free from the pride, prejudice and baggage of the past to take the nation to the next level,” said president of the group, Comrade Emma Zopmal, in statement yesterday.

He added: “Both of them have nothing new to offer Nigeria to turn around our situation. Their desperation for power is a result of past personal frustrations and desires to settle scores. These men can only worsen the ethnic and religious conflicts bedeviling the North and the rest of Nigeria. We need to look beyond these two. The two men are experts in unkept promises. Atiku’s false support for restructuring is just a vote catching bait. We must not allow ourselves to be deceived again.”

The statement called on Nigerians, particularly the youth, to join hands with the Middle Belt body to rescue the nation.

Is this actually the reason for ASUU strike

I don’t want to be sacked like Mourinho – Conte