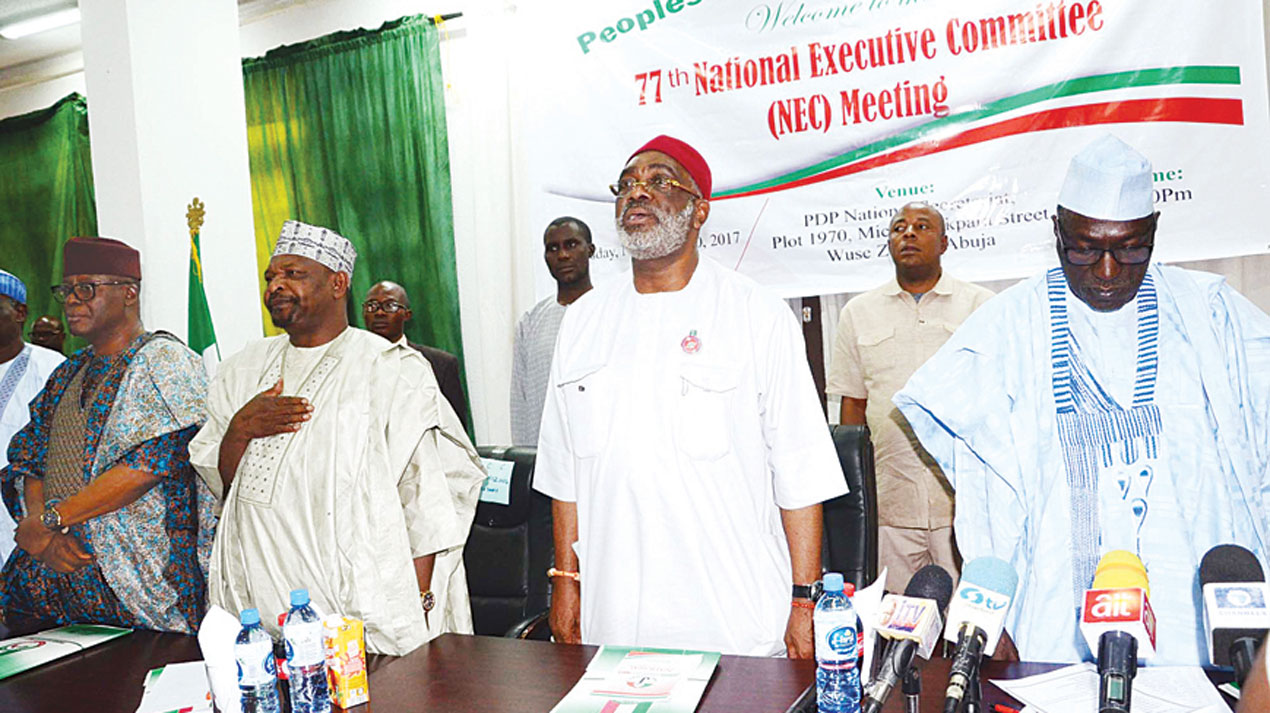 The PDP NEC has also warned aspirants to moderate their languages during campaigns.It particularly ordered the aspirants to stop using derogatory languages against the leadership of the party.

Chairman of the PDP’s Board of Trustees (BoT), Walid Jibril, who gave the warning yesterday during the 77th National Executive Committee (NEC) meeting, which took place at the party’s national secretariat in Abuja, lamented that some BoT members had created impression that the board screened out some aspirants, particularly in the South-West.

According to him, while the party recognises the right of every member to support any aspirant, all actions and statements of such members should not be attributed to the BoT.

However, the party said that it would protect the list of delegates who would vote at its December 9, 2017 convention to avoid incidence where the list could be duplicated or forged.Speaking at the 77th National Executive Committee (NEC) which took place at the party’s national secretariat in Abuja yesterday,

Chairman of the PDP National Caretaker Committee, Ahmed Makarfi, said that he had invited key stakeholders, such as chairmen of the party in the states, to see the list to confirm its authenticity.

“We understand that the delegates’ list may be tampered with and that is why we insisted that chairmen of state chapters should be invited to see the list,” he said.A total of 2,800 delegates are expected to vote at the convention that would produce national officers of the party.

Besides, spokesman of the party, Dayo Adeyeye, who briefed journalists at the end of the meeting, said that NEC approved the congresses conducted in some states as presented to it by the caretaker committee.

Meanwhile, Deputy Senate President, Ike Ekweremadu, who described the meeting as crucial, urged the party leadership to ensure that the convention is transparent and fair, saying that this is the only thing that would make people accept the outcome.

He also tasked the convention planning committee, which NEC had authorised the caretaker committee to announce at a later date, to ensure a hitch-free convention.

Ekweremadu also warned against bad loser syndrome, saying: “People must avoid being used by enemies of the party. Whoever wants to disrupt the party, may end up being the ultimate victim.”

Makarfi had at the 2017 national convention of the PDP professionals and business group in Abuja said the caretaker committee would ensure a transparent process.

Drive against traffic, forfeit vehicle till after Yuletide FRSC warns