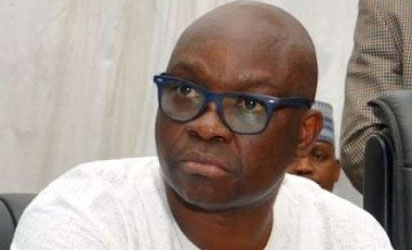 The governor’s move followed a resolution by the state Assembly which empowered him to so do.

The governor through an address speech read on his behalf by the Secretary to State Government (SSG), Mrs. Modupe Alade, at the Exco Chambers, Ado-Ekiti, said “in compliance with the resolution of the State House and pursuant to the powers conferred on Mr. Governor in Section 2 of the Ekiti State Commission of Enquiry, Cap C10 Laws of Ekiti State, 2012, His Excellency, Gov. Peter Ayodele Fayose, has set up a Judicial Commission of Enquiry to look into the financial transactions of the state between 2010 and 2014.”

The probe panel, headed by retired Justice Silas Bamidele Oyewole, the Commission, in its terms of reference, was mandated to ascertain how much the state received as statutory allocations during the period under review, how same were disbursed; and the financial transactions of state between 2010 and 2014.

The panel was also asked to ascertain the amount received on behalf of the State from the Universal Basic Ed ucation Commission (UBEC); investigate the allegations of fraud/loss of funds, including diversion and conversion of the UBEC funds; ascertain the amount that the state took as loans during the period under review and how they were utilized ; and all other issues relating to the finances of the Ekiti State Government within the period under review.

Meanwhile, Fayemi has described the probe panel as an exercise in futility. Fayemi said: “It is obvious, Governor Fayose is desperate to probe the administration of his predecessor in office, Dr kayode Fayemi, for personal vendetta.

Yet, he is advised to be guided by the rule of law and decency in this wild goose chase.

“The governor and members of the panel are reminded that the two cases involving the House of Assembly, its leadership and top officials of the present administration are still pending

In an Abuja High Court and a Federal High Court in Ado, thus making it an act of illegality for another panel to look into the matter.

He threatened to pour acid on me, removed two of my...