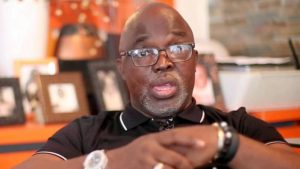 Member, CAF organising committee, Dr Patrick Ifeanyi Ubah has challenged the author of a recent online publication indicting NFF president, Amaju Pinnick, of secretly nursing the ambition of becoming the next CAF president, to provide evidence or withdraw the story.

He said the story is laced with mischief and garnished with fallacy.

“At no time did Pinnick make any such statement at a meeting I attended alongside other FA chairmen from the South South, South East and South West. Where this journalist manufactured his story from still baffles me”

“We did not deviate from the agenda of the meeting which was to appraise Nigeria’s world cup preparation and express our support to the Amaju Pinnick led NFF executive committee towards a successful world cup campaign.

We also expressed satisfaction with the programmes lined up by the NFF, leading to the world cup, the free hand given to the technical crew led by Gernot Rohr in the journey so far and the transparent way with which the board have gone about their activities.

Financially the NFF is very stable, our coaches and players no longer complain, new sponsors are now doing business with Nigeria football and the future looks too good to imagine. These was why the meeting was convened in the first place.

I was the one who moved for a vote of confidence on the present NFF executive committee and it was seconded by the the Akwa ibom state FA chairman Emmanuel Ibah.

Everyone present later supported the motion and it was jointly approved.

The meeting had no political undertone. We didn’t discuss the NFF election because that wasn’t on the agenda so I am amazed how someone can even imagine that we went a step further to talk about the CAF election which is still far away.

He has however called on all true stakeholders of Nigeria football to stay focused and united ahead of the fast approaching FIFA world cup, stressing, that the event in Russia could provide Nigeria a perfect platform to make history.

“The list released by Gernot Rohr has all the ingredients of a good team. We are not going to Russia as underdogs because we have qualified five times before and made it to the second round in the last two editions.

It will not be out of place therefore if we aspire for a quarter or semi final placing. If we get to that stage, then don’t rule out a surprise he concluded”

The president of FC Ifeanyi Ubah is happy that one of his key players in their 2016 CAF Confederation cup campaign, Stephen Eze, made Nigeria 30-man World Cup provisional list, released on Monday.