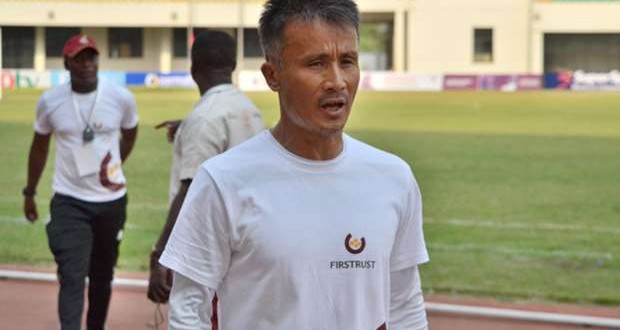 While the news of the dismissal of Kenichi Yatshuhashi as the Head Coach of FC Ifeanyi Ubah did not come as a surprise due to players and fans’ anger, many of whom were disgruntled and disillusioned by Kenichi’s display of technical incompetence, regressive training regime and disregard for the Management, the Chairman of the Anambra based club and FC Cup Champions, Chukwuma Ubah has revealed the underlying reasons that saw the sledgehammer descend on Japanese coach, Kenichi Yatsuhashi sooner than expected.

“You do know we are a very professional outfit, driven by excellence while aiming for success and achievement of any stipulated goal at any point in time” began the charismatic Chukwuma Ubah.

“When the position of the Head Coach became vacant, we immediately swung into action to scour the planet for the perfect man for the job who had the right experience, passion, vision and above all, team spirit in order to help us achieve our lofty ambitions in the forthcoming season” he said.

“We identified acting Head Coach, Black Stars of Ghana, Yaw Preko who we believed had a reputable pedigree to take our club to the next level. However, Yaw Preko whom we held in high regards suggested Kenichi Yatsuhashi to us based on his previous working relationship with him and we adhered which Yaw Preko who is still with us can attest to. This was the biggest mistake we made as we failed to carry out our due diligence on whom we sought to employ, depending solely on the recommendation of his former assistant”.

“All demands, financial and otherwise made by Kenichi were met by the club, including all the requests which the club deemed as exorbitant and irrelevant. We did all we could to make him comfortable as we wanted results.”

“The first red flags were raised when Kenichi started disbanding the team, leaving out our major star players including national team players Ikechukwu Ezenwa, Stephen Eze, Adeleye Olamilekan, Tamen Medrano, Kojo Baah, Wasiu Jimoh amongst a host others. This action led to the exit of some of our core players who were frustrated at being frozen out, notably Ismaila Gata, Bello Koformata and Okereke Maduabuchi. While we got torrents of complaints from the players, we allowed him to take his chosen and preferred route as we felt he had a masterplan. His training regimes were strange as he totally eliminated aerobics while insisting that the players undergo massive weight lifting, lifting weights as heavy as 100kg across 100 metres, culminating in lots of injuries. While all these were not approved by the club, we overlooked his actions on the back of his assumed expertise”.
It will be recalled that the romance was short-lived as Kenichi Yatsuhashi did not last beyond 30 days in that portfolio as he was sent packing even before the NPFL Super 4 Tournament held in Enugu came to an end as FC Ifeanyi had performed not only woefully but were utterly dismembered by the oppositions they played under the Japanese.

On the woeful display at the NPFL Super 4 and the eventual dismissal of Kenichi, Chairman of FC Ifanyi Ubah explained further. “On the 6th of December, when the team landed in Enugu for the NPFL Super4, Management had a routine meeting. During the course of the meeting, Kenichi was requested to give an explanation as to why our major players were left at home especially Tamen Medrano, Kojo Baah and Wasiu Jimoh. To our greatest surprise, Kenichi clearly irritated by the question responded “If I do not win the Super 4, sack me” and he stormed out of the meeting. I tried calling him back and he ignored me. Despite the blatant disregard for hierarchy, I overlooked his behaviour because he had set a goal for himself. I had prayed he did not just shoot himself in the foot. I had wanted him to prove everyone wrong, even the fans. So how did we not support him? How did we interfere? Did we force him to play National team Goalkeeper and our No. 1 Ikechukwu Ezenwa whom he benched in the first match? Did we force him to play National team defenders Olamilekan Adeleye and Stephen Eze whom he put on the bench? Or did we instruct Tamen Medrano, Kojo Baah, Wasiu Jimoh and others to travel to Enugu without the Coach’s consent? If we wanted to override him, would they have been left in Nnewi only to be recalled by Yaw Preko for the last match which saw a much better and purposeful display? Is it not clear that he has an attitude problem? Can you imagine that this same man who was under the club’s employ vehemently refused to adorn the colours of the club despite several pleadings with him? His excuse was that he was under contract with an unknown brand, something we have not been able to verify till today. Do not get me wrong, we were aware of his terrible attitude due to his last stint with Hearts of Oaks which was well publicized in Ghana, leading to his shameful dismissal. However, he assured us that he was a totally changed and transformed man to which Yaw Preko attested to.” Chukwuma explained.

“Kenichi wore an air of self-imposed King as nobody could make suggestions nor have any input whatsoever as he believed that his thoughts and words were final and should not be disagreed with or scrutinised. This led to a total collapse in the relationship between himself and the backroom staff as well as the dressing room”.

“After his woeful display at the first and second match, it became obvious that our beloved club was headed for the doldrums under Kenichi; a change became imperative. His tactical ineptitude became apparent when he failed to adjust in the first game by putting in a defender to shore up the defence when Akakem, our defender was given a red card while we were 1nil up. We eventually lost the game 2-1 to Wikki Tourist. In the second game, we lost 2nil to Rivers United, a team who played part of the game with 10 men and instead of us to take advantage of the numerical superiority, our opponents made us pay for Kenichi’s lack of technical depth.”

“When the complaints became too much, it became necessary that the Management of the club took charge and we immediately swung into action to prevent a total breakdown of important sectors of the Club which would all but undermine every success story recorded last season. Kenichi was invited for a parley on numerous occasions and encouraged to reconsider his current stance as it was doing more harm than good while threatening to destroy the Club from the inside out yet, Kenichi remained adamant. The goals and views of the Club became divergent from those of Kenichi and a change was unavoidable. Fortunately, he understood the situation when explained to him and we parted ways amicably. Kenichi was a nightmare and terrible mistake, his high-handedness and stubbornness is his undoing. Kenichi is not good enough to coach any team with lofty aspirations”, Chukwuma concluded.

On the direction of the club, Chukwuma Ubah assured fans of FC Ifeanyi Ubah that the goals and interest of the club will remain paramount. “Our fans should rest assured that all decisions taken and executed by the club are driven with the best interests of the Club at heart. The Club is moving in the right direction and nothing will be made to derail or stunt the progress we have made.

Kenichi, who was also dismissed from Accra Hearts of Oak under similar circumstances is currently in search of a new job according to a reliable Nigerian agent in the Czech Republic whom Kenichi contacted to help in the searc for a new job.

With the new season slated to kick off on the 7th of January 2017 with a match against Kano Pillars at the Sani Abacha Stadium being the first hurdle for the Warriors, fans of FC Ifeanyi Ubah will be hoping for a winning start.
FC Ifeanyi Ubah will be looking to improve on the league record finish of 4th last season and at least advance to the latter stages of the CAF Confederations Cup which will see the Anambra Warriors make their continental debut.

Why FG, NASS Must Save 2000 Capital Oil Workers Now