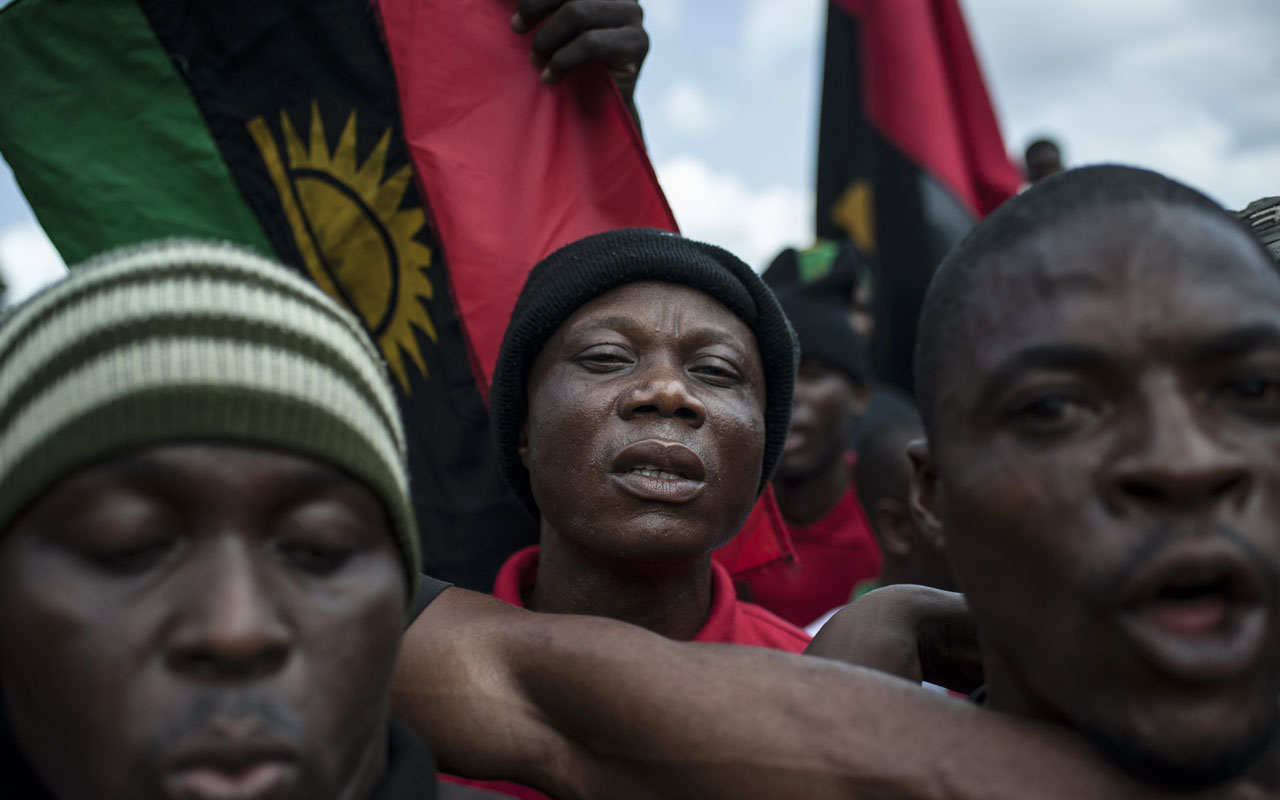 Supporters of the Indigenous People of Biafra (IPOB) wave Biafran flags on May 28, 2017 in the Osusu district of Aba.<br />The Nigerian civil war’s 50th anniversary will be commemorated on May 30. The war was triggered when the Igbo people, the main ethnic group in the southeast, declared an independent breakaway state, the Republic of Biafra. / AFP PHOTO / STEFAN HEUNIS

It is obvious that Anambra is ripe for governorship election. The atmosphere in the state also bear credence that this is election time in the state. However, while everything is looking up to the election, how it could be achieved in the face of the plethora of threats and other sundry and sour feelings from certain quarters has become the biggest challenge of stakeholders in the state.

The election is being contested by 36 candidates drawn from different political parties. These candidates have toured the nooks and crannies of the state to canvass for votes and showcase how much they could be used to turn the fortunes of the state around if given the opportunity. Since last week however, these efforts have come under serious threats by activities of certain groups and individuals, who either want the process stopped or call for its boycott by the electorate.

One of them, a human rights lawyer, Jezie Ekejiuba, who dragged the Independent National Electoral Commission (INEC) to court over alleged disobedience to a subsisting Court of Appeal order, is asking that the election be stopped pending the resolution of the matter. Also the proscribed Indigenous People of Biafra (IPOB) has threatened to deal with anyone found voting on Saturday. There were other rumours of clandestine moves to derail the process by certain power brokers in the state, who are said to be uncomfortable that allowing it to hold, could jeopardize their political and business interests among others.

Of all these however, the threat by the IPOB seems to be more worrisome and catching attention and reactions of the public. This follows the believe by many that for the group, which went into oblivion in the wake of the recently concluded Operation Python Dance 11 that led to the fleeing of its leader, Nnamdi Kanu to an unknown destination, to have suddenly resurrected to protest the process, speaks volumes on what awaits the exercise.

The IPOB had organized a protest march around Onitsha axis last Friday, where it allegedly threatened “death” on any member of the public who comes out on Saturday for the purpose of voting. Emma Powerful, the Media and Publicity Secretary of the group, had told reporters after their protest march that it was a demonstration to notify the Federal Government that the group was alive and determined to achieve Biafra.

“If you vote you will die. Don’t go out, stay in your house. If you vote on November 18, you will die. We are not running around for the zoo,” he was quoted to have said as the members sang while marching around the commercial town of Onitsha, next to the River Niger.

He had continued: “There will be no election. We will not participate, we will not vote. Nothing concerns us with any election. We are formidable. We are in Onitsha to tell the Federal Government to produce Kanu. They should release all the Biafrans in Nigerian prisons. Anybody doubting the resolve of IPOB under the supreme command of Nnamdi Kanu is mistaken. We will put Anambra State on lockdown on November 18. This is a taste of what is to come. Nigeria should be prepared.”

The threat is not coming for the first time; the IPOB had severally threatened the coming election. In fact, a few months to the Operation Python Dance 11, its leader, Kanu had said in an interview that the only thing that could make the election hold was if the Federal Government gave a date for Biafra referendum. He had said that boycotting the Anambra election was a prelude to what could happen in the Southeast in the 2019 general elections.

“Watch what will happen; that election will not hold, not when I remain the leader of the IPOB. We have done our sensitization and we will continue with it. We don’t carry arms, we don’t force anybody; but I am convinced that the people will not vote because they listen to us, they also believe in us and government continue with their propaganda. We will know who is on ground on that day,” Kanu had said.

It is believed that the constant threat to the Anambra election and by extension, the 2019 general elections, were part of the reasons for the alleged invasion of the residence of Kanu during the military exercise as well as the proscription of IPOB by the Southeast governors and Igbo leadership. Indeed, the Anambra election and the fresh threat by IPOB have assumed discussions in several quarters. At every road junction where newspapers are sold, people now gather freely to talk about the issue. The development is not only unsettling the electorate but also putting the election in jeopardy as many are expressing fears that there might be bloody confrontations after all.

Those sympathetic with the group insist that the electorate will not vote on Saturday as a mark of solidarity with the aspiration for the realization of the Republic of Biafra, a quest which they believed is achievable by civil disobedience and other methods.
But there are those who believe that IPOB has become a propaganda tool and paper tiger, which has engaged more in talking and threats than practical actions. They insist that the threats are not real and far from being achievable. They refer to Kanu’s “disappearance” and inability to continue with the struggle after his residence was allegedly invaded and his inability to practicalize the “threat” to stop President Muhammadu Buhari from stepping into the soil of Southeast, saying that “Buhari has come, he has marched and slept in the Southeast, what has happened?” The president arrived Abakaliki yesterday on a working visit to Ebonyi and he is expected in Awka today to round up the campaigns of Tony Nwoye, the All Progressives Congress (APC) candidate.

Mazi John Uka, who claims to belong to the group, told The Guardian at Edinburgh roundabout, Enugu, where members of the group clustered around a newspaper stand that, “You will see what will happen on Saturday. If they (security agents) stop our members in the town, will they also stop them in the villages? We have said there will be no election and there won’t be any. Let them continue to waste their time and resources planning an event that people will not participate in.”

However, Head of the Movement for the Actualization of Sovereign State of Biafra (MASSOB), Uchenna Madu, told The Guardian that the alleged threat against the election was “purely an IPOB programme.” Distancing his group from the threat as well as insisting that the IPOB was misquoted, Madu stated: “The issue of boycott of Anambra election is an initiative of IPOB and they are entitled to whatever they want to do concerning the election to press for the release of their members. But we believe that the election will come and go and the agitation for Biafra will continue.

“But I also believe that the IPOB was misquoted. I don’t believe that IPOB should say that people including their members should die because IPOB has members in almost every political party participating in the Anambra election. It is true that all of them may not believe in Biafra struggle for one or two reasons, but it is not enough to wish anybody dead. All I know is that elections will come and go and those of us in the struggle will continue until the task is realized. For us, we are not stopping anybody from voting on Saturday and we are not asking people to participate,” he stated.

A stakeholder, Chief Ugo Ofodile however cautioned on a move that could derail the peace of the state, stressing that it was not in the interest of the people of the state for anybody to truncate the pace of democracy under whatever guise.

“Anambra people are peace loving. Enough consciousness has been built over this election and the people are desirous and looking forward to the poll on Saturday. I do not think that they will fall to this cheap propaganda that they should not come and vote,” he explained.

The Senator representing Anambra North, Stella Oduah, while reacting to the development, warned that the state risked being declared a state of emergency should the people heed the call by the IPOB and urged the electorate to come out and exercise their franchise.

According to Oduah who is also a former Minister of Aviation, “Our constitution does not allow for half-a-minute space between the incumbent tenure being over and the next tenure. Therefore, if we fail to come out and cast our votes to have a new governor, what will happen is that the Federal Government will provide an administrator and declare a state of emergency.

“It means that democracy will elude us. The administrator that would be governing us would not be whom we voted for or whom we desire; that is not what we want. Therefore, we must not allow ourselves to be disenfranchised; we must make sure that we come out on November 18th and vote.”

The latest threat by IPOB may have given credence to the concern recently raised by former Abia State governor, Orji Uzo Kalu that the outlawed group had thrived because some politicians in the zone wanted to use the members to prosecute and win elections. The observation, which was not denied anywhere, has manifested in the campaigns of the governorship candidates as some have not openly condemned their proscription but have shown their allegiance to the group.

The United Progressives Party (UPP) candidate, Osita Chidoka did not only visit and contribute to the release of Kanu from prison, he also received the Biafra agitator at his Obosi country home. At the campaign tour that brought him to the Enugu Sports Club last week, he condemned the Federal Government and Southeast governors for proscribing the group.

In the same vein, the APC candidate, Nwoye picked Mr Dozie Ikedife jnr, whose father, Dr Ikedife, the former President-General of Ohanaeze Ndigbo, is a known promoter and grand patron of IPOB. The Peoples Democratic Party (PDP) candidate, Oseloka Obaze, also taunted Governor Willie Obiano during the governorship debate held on Sunday, for allowing his colleagues proscribe the IPOB. Those close to politics believe that a major plank in the campaign strategy of some politicians was badly removed by the proscription and the quiet stand of the outlawed group and that their ‘resurrection’ was needed to advance their gubernatorial quest.

It is however left to be seen how these threats will impart on Saturday’s poll. However, Police have assured electorate of the state of their safety, asking them to disregard the threat by the group as that which would “as usual amount to nothing.” Nkeiruka Nwode, Public Relations Officer of the Anambra Command, had assured that adequate security arrangements has been made to ensure protection of lives and property, even as she warned trouble makers to stay away from the state.