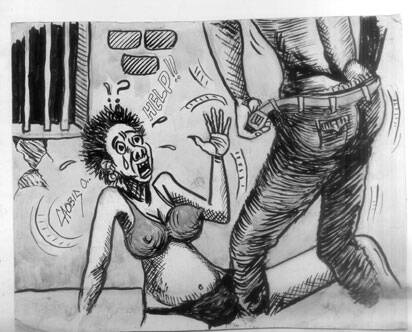 Why we sexually abused our victim for 3 days – Kidnapper​
A notorious kidnapper, Abubakar Mojumba, now in police net, at the weekend narrated how members of his gang sexually abused a female victim for three days when members of her family could not raise money demanded as ransom. The kidnap suspect, a Fulani, was said to have stormed the home of their victim, also a Fulani at Elewuro village, Iganna , Oyo State and abducted the woman, Saidat Musa.

They also stole victim’s husband motorcycle with which she victim was taken away on June 7, 2017 at about 1am. Speaking further, the kidnap suspect who was in handcuff at the Eleyele Police headquarters, Ibadan, Oyo state last weekend, said he was only promised the motorcycle if the operation succeeded by other members of the gang now at large.

The 22-year-old kidnapper told newsmen that the gang had, after the abduction of the victim, went back to the husband of the victim to collect money demanded as ransom when some of the villagers gave them a hot chase and in the process, he was caught, while three other members escaped. Mojumba , who spoke in Hausa language through an interpreter , said he was almost killed by the angry villagers before he was rescue by the police.

The 22 year old suspect sustained severe injuries all over his body especially on head. According to him, when other members of his gang could not get the money, they went back into the forest where they kept their victim and she was sexually abused for three days . The captive was later released by the gang voluntarily.

The Oyo State Police Commissioner, Mr. Abiodun Odude, who briefed journalists before the parade, explained how the kidnap suspect was arrested, saying that three other now at large were been trailed by his men. He revealed that a locally made single barrel gun was recovered from the suspect when he was nabbed.

” On June 7, 2017 at 1am , the suspect and others now at large conspired together and kidnapped a 22 year old female victim. Saidat Musa who was abducted from her residence in Elewuro village, Iganna to a thick forest in Iwere -Ile where she was held hostage for three days and sexually abused before she was rescued from her abductors,” he said.