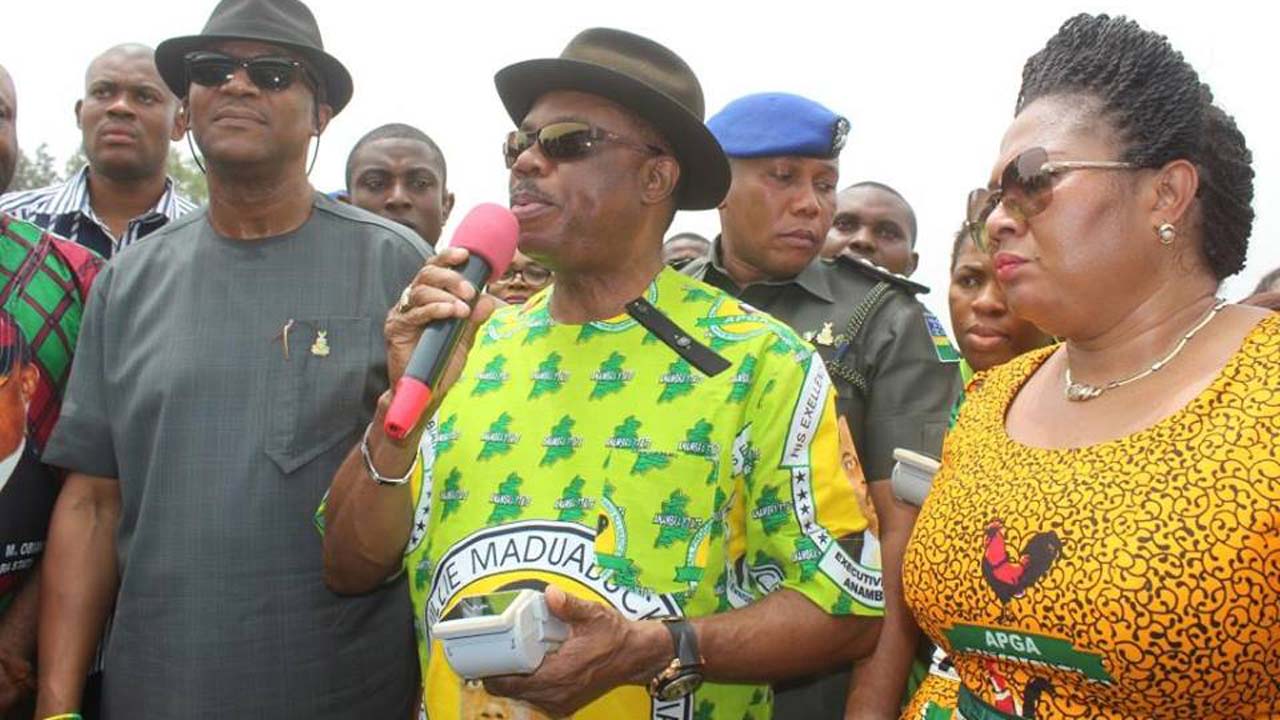 Even though the Independent National Electoral Commission (INEC) is yet to declare winner of yesterday’s governorship election in Anambra State, there were indications last night that the All Progressives Grand Alliance (APGA) candidate, and incumbent governor of the state, Chief Willie Obiano, might retain his job.

Feelers from across the state showed that the candidate performed fairly well in wider areas than any other candidate in the
election. Specifically however, early results from polling units in Allor, Nnewi, Aguluzigbo, Aguleri among other areas in Anambra South showed a straight fight between Obiano and the All Progressives Congress (APC) candidate, Tony Nwoye.

MING  also gathered that in the northern and central parts of the state, it was a ding-dong between APGA and APC, as stakeholders delivered their various polling units to their political parties.Facts available,  also show that the Peoples Democratic Party (PDP) may have to wait for another four years to re-contest the governorship seat which, it lost to the ruling APGA over 10 years ago. Sources said that the party may not have done well in the election, as in several polling units, it trailed behind the two leading parties.

An APGA source informed The MING  last night that, “field reports available to us showed that our candidate, Obiano is doing fairly well. In areas he won, we saw a very wide margin and secured good votes in areas that he did not win. If all things work well and the result of the election published accordingly, it will be another song of victory for the APGA in the state”.

“We are sure of nine local governments and 25 per cent of votes cast in the others. If that is the case, then it is a straight victory for the party because our members turned out in large numbers to cast their votes.” Another source, however, said that the election may not produce a clear winner after the first round without going into a run-off, stressing that Obiano and Nwoye were head-to-head finishing. The source stated that in many polling units, it was either Obiano or Nwoye, adding however, that one of them came second where the PDP may have done well.

Meanwhile, collation of election results continued last night, while it is expected that the INEC may announce the final results before
dawn today.Meanwhile, former President General of Ohanaeze Ndigbo, Dr. Dozie Ikedife, has hailed the conduct of the election, saying it recorded 80 per cent voters’ turnout.

Ikedife, who, however, alleged inducement of voters in parts of the state, explained that the electorate also displayed some level of maturity that reduced crisis that usually charaterise elections in the state.He commended the efforts of the Independent National Electoral Commission (INEC) in ensuring that electoral materials were distributed to the people early, stressing that it reduced the long wait by electorate to cast their votes.

Speaking in similar vein, wife of former Biafran warlord, Mrs Bianca Ojukwu, said the peaceful conduct of the exercise should be sustained, stressing that there were no reported cases of violence in the state.“It was without incidents and in Nnewi, it was generally peaceful and the people came out in their numbers to vote for candidate of their choice. I congratulate the people, the security officials, the INEC and every stakeholder that contributed to the success of this exercise. I want them to keep it up so that in future elections, Anambra will reckon as one of the freest states,” she said.

At Ukpo Ekwueme hall, Arthur Eze’s APC secured 409 votes against APGA’s 102 votes PDP’s 15 votes while Umeh secured 68 votes for his APGA and APC 8 and PDP 1 at Aguluzoigbo, Uzoanunu ward 2.There were, however, unconfirmed reports that a collation officer in Aguluizuigbo disappeared last night as well as alleged case of ballot snatching at Omor.

Following allegations of malpractice in some areas, a group under the auspices of Independent Service Delivery Monitoring Group (ISDMG), has condemned reported cases of widespread voters’ inducement and vote buying during the election. The group, which said it deployed 100 election observers during the exercise expressed worry at the increasing sophistication of political parties and their agents in colluding among themselves to pull resources together to openly bribe security agencies, INEC officials and even observers in order to brazenly and openly buy votes and induce voters.

The ISDMG Executive Director, Dr Chima Amadi, during the presentation of the group’s preliminary report, said there was an improvement in the voting process, especially the quick deployment of election material.While commending voters for their massive turnout despite the pre-election security scare, he said reports from “our observers in the field on the widespread open selling of votes by citizens however; cast a major slur on the integrity of the votes.

“The trend of vote buying, which has become a major feature of recent elections, sadly repeated itself with disturbing brazenness in Anambra State.”Speaking on the conduct by INEC, he said there were good preparations on the part of INEC. “There were substantial reports of card readers malfunctioning as a result of technical hitches although in many instances the INEC technical team quickly rectified the faults.

He noted that the practice of simultaneous accreditation and voting contributed immensely to active voter participation, and reduction of tension in voting points.Amadi said in most places visited by their observers, it was observed that most of the voting cubicles were placed in the midst of the people, thereby compromising the secrecy of the ballot.

Speaking on the conduct of security operatives, the ISDMG director said reports from their observers on the field indicated that the police and other security agencies conducted themselves in civil and professional manner in their dealings with the electorates. He said, however, in most cases they turned blind eyes to widespread vote buying and in certain cases received payment to provide cover to the nefarious activities of political parties and their agents.

“The welfare of the police and other security agencies has remained a recurrent problem in elections; however we note a remarkable improvement in their mode of transportation to the state,” he stated.

“We note that the police and security agencies were effective in maintaining law and order as exemplified by the arrest of one Professor Nwamkpa who was arrested by the DSS for sharing money at a polling unit and was later released,” Amadi added. Stakeholders of the APC, also complained about alleged intimidation by the Police and the military.

Both the Minister of Labour and Productivity, Chris Ngige, and Nwoye told journalists that the police and the soldiers working for APGA were harassing and intimidating their supporters in the state.Ngige who voted at Alor pooling Unit 9, alleged that in his base, Idemili North and Idemili South, APC supporters were denied the opportunity to cast their votes by some policemen and soldiers collaborating with APGA.

Also citing Abatete Town, he alleged that APGA led by one of the stalwarts, in company of policemen invaded polling booths and chased people away adding that the same thing happened at Nkpor.“The aim of chasing away is to frustrate election in my stronghold. If they succeed, we have no choice than to ask for the cancellation of results in these areas. This happened in 2013, where there was no voting in Idemili South and Ogbaru, when INEC fixed re-sheduled election on a Sunday when many people were in church.I am suspecting foul play in Idemili North, led by Ifeanyi Ibezim.

Nwoye, who assured that with what was on ground, he would win the election, expressed concern over alleged intimidation by APC supporters with the aid security operatives.

Reacting to the allegations, the Director General of Willie Obiano Campaign Organization, who voted in his Aguluuzoigbo Town Hall Ward One, declared that APC has failed in the election and was accusing falsely.“We said it clearly, that for this election to succeed, there should be enough security at the pooling booths.We have seen our performance in our pooling units and believe it or not, it would be the same all through.

Owerri bank robbery: Why gallant policeman, Iboko had to run from...