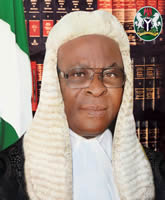 ​
The Supreme Court Monday reserved judgment on the Peoples Democratic Party (PDP) leadership tussle, even as it declared that the appeal of the Senator Ahmed Makarfi-led National Caretaker Committee of the party was valid.The Makarfi-led PDP is challenging the validity of the Court of Appeal’s judgment, which affirmed Senator Ali Modu Sheriff as the authentic National Chairman of the party.However, after taking the submissions of counsel in the matter Monday, the Chief Justice of Nigeria (CJN), Justice Walter Onnoghen, who presided over the hearing of the appeal, announced that the date for judgment would be communicated appropriately to the parties.In an oral argument in support of his written brief, the counsel to Sheriff’s group in the PDP, Chief Akin Olujimi (SAN), had urged the Supreme Court to dismiss the appeal filed by the Makarfi-led group on the grounds that the appellant did not have the authority to initiate an appeal in the name of PDP, having lost so in the Port Harcourt judgment, which pronounced Sheriff as the authentic chairman of the party.According to Olujinmi, by reason of the judgment delivered on February 17 by the Appeal Court, Makarfi’s side lost every right and privilege to act on behalf of PDP.He stated that the National Legal Adviser as well as the National Secretary of the party had in their motion, applied for withdrawal of the appeal, noting that the party cannot initiate a legal action against itself.But the counsel to Makarfi-led side of the PDP, Chief Wole Olanipekun (SAN), in his own argument, urged the court to dismiss the objection made by Sheriff’s group on the grounds that it was incompetent and lacked merit.His argument was that at the Port Harcourt judgment, Makarfi’s group was the appellant in the name of PDP while Sheriff joined issues with the group in that capacity.He maintained that until the Supreme Court, being the highest in the land, pronounces which of the factions is the authentic camp to lead the party, the Makarfi-led PDP has the right to initiate an appeal.Olanipekun also drew the court’s attention to Rule 29 of the court and consequently urged the court to invoke the rule on those representing Sheriff.Earlier in a ruling, the Supreme Court had dismissed the application filed by Sheriff challenging the competence of the appeal filed by Makarfi, claiming that the appeal was filed outside the stipulated period by law.The CJN, in dismissing the application, upheld the argument of the counsel to Makarfi that the appeal was filed within the time limit.Justice Onnoghen upheld Olanipekun’s argument that the said judgment, having been delivered on February 17, and the notice of appeal having been filed at the Supreme Court on April 24, met the appeal timeframe, making it competent.After listening to the arguments presented by both parties, the CJN announced that the judgment day would be communicated to them.The court had at its last sitting ordered the counsel in the matter to file their written briefs and adjourned to May 25 for hearing of the applications.However due to the work load of the court, coupled with the approaching recess period for all courts in the country, the matter was rescheduled for Monday, three days earlier than the adjourned date.

Fake beggar confesses, how much he makes daily higher than bank...