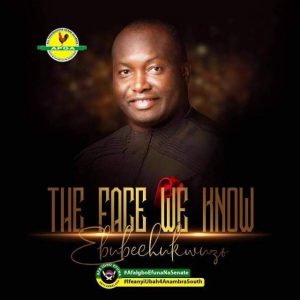 From time immemorial, men do control the tenets of power, leaving behind imprints that change the world around them. In all these, a fact sure stands, it is either they are on the good side of history or not. As such, the world always craves for purposeful leaders. A nation like Singapore will never forget the indelible marks of Lee Kuan Yew, who moved the nation from Third world to First world country.

Interestingly, the people of Anambra South are fortunate to have a great man, Dr. Patrick Ifeanyi Ubah (Ebubechukwuuzo Nnewi), a man of impact. The Holy Book says ‘show me your faith without your works and I will show you my faith by my works’. This statement aptly portrays Dr. Patrick Ifeanyi Ubah’s guiding principles. Spanning well over two decades, he has shown a strong sense of character in impacting the world around him. With significant investments all over the country, the giant strides of Dr. Patrick Ifeanyi Ubah are being felt in numerous families and communities through the provision of employment opportunities. Worthy of note is his enviable record as an astute businessman, who has built a business empire from the scratch. He is a sharp contrast to politicians and many so-called business men who have used the corridors of power and dubious means to enrich themselves while maintaining huge investments abroad, all from the proceeds of their illegitimate sources of wealth.

In a time largely characterized by a dearth of good leaders, the people of Anambra South are very fortunate to have one in Dr. Patrick Ifeanyi Ubah whose massive investments in youth development and strong desire to transform the society are highly commendable. While governments at various levels continue to pay lip service to youth and sports development, the oil magnate took a bold step by investing in sport. A worthy example of such investment by him is FC Ifeanyi Ubah, a football club that has won six major tournaments in about four years of its existence. Also, his decision to build a massive sport development centre is a strong testament of his will to unlock the unlimited potentials of the youth. As he believes, “invest in youths, and you would have set a nation on the path of greatness”. As Francis of Assisi said, “start by doing what’s necessary, then do what’s possible, and suddenly you are doing the impossible”. No doubt, Dr. Patrick Ifeanyi Ubah is already doing the impossible without occupying any political position and his achievements speak volumes of his philanthropic personality and obvious for all to see.

As Shakespeare rightly said “all the world is a stage…” Ndị Anambra South cannot afford to let the mediocre and those with obsessive desire of power to grace the centre stage of leadership. Leadership is a sacred commitment and only personalities like Dr. Patrick Ifeanyi Ubah who ticks all the right boxes through outstanding qualities, should be allowed to occupy its position at the Senate.

Ndị Anambra South cannot afford to let this golden opportunity of electing Dr Patrick Ifeanyi Ubah to represent them at the upper chamber slip away. Therefore, to ensure that a better Anambra South is achieved, the All Progressives Grand Alliance (APGA) delegates of the Senatorial District should vote for him at the Primary because he is the best aspirant with the required visionary leadership structure.

Liverpool’s Mane out for up to six weeks